It’s time to let the air out of another *sigh* liberal balloon, folks.  It’s getting monotonous, but it’s work that’s gotta be done.

Chris Redfern, who is the Chairman of Ohio’s Democrat Party, is only the latest in a long line of liberals who weigh “health care” between the supposed poles of “privilege” and “right.”

The problem here, of course, is that privileges and rights do not constitute a binary choice.  As Dr. Walter Williams often says:  let’s look at it.

Our question this evening has to do with how we classify things that we somehow obtain.  Health care – or more precisely, health insurance, because anyone who needs health care in this country by law is entitled to receive it without consideration of his or her ability to pay – is just the context.  But it’s an illustrative one.

To begin with, therefore, we have a 2×2 matrix: 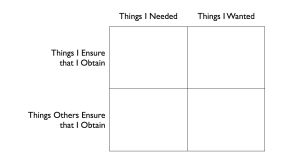 Now we’re in a position to start labeling what’s in the four cells of the matrix.  “Rights” are things that I need that are subject to a social contract, that is, things that society must recognize and, if necessary, confer or provide:

Those things I want that others ensure I obtain are probably best described as “privileges;” that is, others must confer them on me in order that I might enjoy them.  An example would be going to a private preparatory school as a child; I could not have afforded it, but it was conferred upon me by dint of my parents’ sacrifices.  Thus:

If I want something but do not need it, and if it is up to me to obtain it, we can call it a “luxury:”

The last cell consists of things I really do need to survive but that I must provide for myself.  These are rightly termed “responsibilities:”

By now it should be clear that the only governing narrative, or paradigm, in which rights and privileges are mutually exclusive poles is one in which “what I have” is exhaustively and uniquely determined by the agency of others.  This, in short, is the coin of which the welfare state and statism are complementary sides:  if I am to have something, it is the duty of society to ensure that I have it.  This paradigm completely eliminates the first row; I am a passive participant in arranging my own life.

And so it is with the modern liberal.  I am not responsible for the things I need, and others’ luxuries represent the excess from which society draws its redistributed resources to underwrite the expansion of others’ “rights.”  This is why, for example, the president has been heard to say, “how much do you really need to live?  There’s got to be a piont (determined by leftist bureaucrats and legislators, we are to understand) at which you say, ‘I have enough.'”  It is also why the president has spoken contemptuously of the Constitution as a document of negatives and its alleged failure to set forth “what the federal government MUST do on a citizen’s behalf.”

One thought on “Privileges vs. Rights”